It was the second consecutive year the trucking industry finished at the top of the fundraising race. The Ontario Trucking Association led all organizations in 2016 with over $31,000 raised. 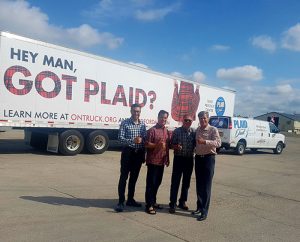 The presentation took place in Milton, Ont. at Arnold Bros. Transport, which was instrumental in putting CTA over the top in 2017. Arnold Bros alone raised almost $17,000 of the total $49,000 contributed by CTA member companies.

“For the second straight year, the Canadian trucking industry really put it in gear and stepped up in the battle against prostate cancer,” Rossi said as he handed the framed Plaid Jacket to Arnold Bros staff. “Arnold Bros specifically deserves an honourable mention for leading the way this year and for their dedication to this campaign. They really put their heart into it.

“On behalf of the 1 in 7 Canadian men who will be diagnosed with prostate cancer in their lifetime and their families, I can’t thank the CTA enough for their commitment to making a difference in the fight against the most common cancer in men.”

CTA would once again like to thank Prostate Cancer Canada and Rocco Rossi for their partnership on this campaign – and especially the CTA carriers, provincial associations and Team Canada allied trades members – that were kind enough to donate to the cause.