Ontario Premier Doug Ford was a guest of Challenger Motor Freight this week, as he toured the carrier’s Cambridge facility, stopped to chat with drivers, technicians and employees and then sat down with company chairman Dan Einwechter as well as Ontario Trucking Association chair David Carruth of One for Freight and president Stephen Laskowski to discuss some of the trucking industry’s most pressing issues.

Accompanied by Minister of Transportation, Jeff Yurek, and Minister of Economic Development, Job Creation and Trade, Todd Smith, the premier listened attentively as industry stakeholders explained how the trucking industry is grappling with an acute professional driver shortage and needs the provincial government’s help in recruiting truck drivers from abroad. 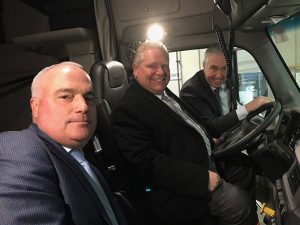 “We need more drivers because we need to get grocery store shelves stocked, we need to get food on the table and we need to get computers for kids at school and hospital beds for grandma at the hospital,” Einwechter told Ford, adding that Challenger had success with the former foreign worker program in the past; and at one time about 80 of its 1,600 drivers were recruited through it.

Einwechter, Carruth and Laskowski appealed to Ford to allow the trucking industry to tap into immigration channels by giving the sector access to the Immigrant Nominee Program (OINP) – a pilot program that currently allows similar trade sectors like agriculture and construction to bring in skilled workers with permanent resident status.

“While this won’t solve the industry’s acute labour shortage completely, without access to the same immigration channels currently available to other trade sectors, the trucking industry’s labour supply will soon be reaching a crisis point,” Laskowski said. “I have a member in Northern Ontario that has 20 trucks parked on the side of the fence, not because he can’t get the loads to move, he can’t get drivers. That’s not good for Ontario; it’s not good for the economy, and it’s not good for our sector.”

Carruth said that even smaller carriers like his company would benefit from the program. “For us, we’re always looking for five drivers,” he said. “A program like this, although it’s only five drivers, would help us as a small carrier to bring in (future) Canadians who want to be here.” 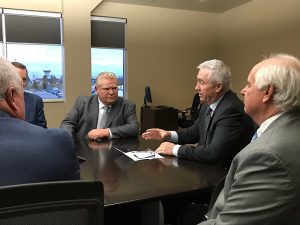 He stressed that carriers included in the pilot need to ensure they are not exploiting the program by providing secure, well-paying positions with ongoing training. He said carriers also need to show they are compliant with all safety, environmental and labour rules and standards.

“The industry has an obligation as well,” said Carruth. “Carriers who make these commitments and have a proven record of compliance are the ones who should be considered.’

This brought the conversation toward Driver Inc. the increasingly widespread employment model that runs contrary to many Canada Revenue Agency and Employment and Social Development Canada rules. Driver Inc participants are able to avoid certain tax and labour law obligations.

Collectively, the trucking industry representatives called for more enforcement across the industry.

“All we expect is a level playing field…how to level the playing field without costing you a dollar,” Laskowski said, offering suggestions of how the industry as a whole can help fund increased enforcement and inspection of the companies who consistently break the rules.

At the conclusion of the 30-minute briefing Ford acknowledged many of the challenges expressed and promised to get back to the industry with some solutions in the new year. He also called on the industry to help the province identify red tape and redundant regulations that can be eliminated to improve efficiencies and reduce unnecessary costs.

— With notes from Truck News