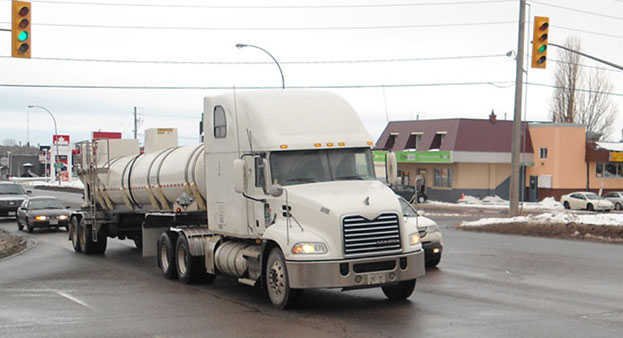 In a letter to Thunder Bay Mayor Keith Hobbs and City Council, the Ontario Trucking Association (OTA) is once again weighing in a two-decade-old issue involving commercial traffic routes through Thunder Bay.

City Council is currently exploring the development of a new truck route which would impact all highway trade serving northern Ontario and Western Canada. If adopted, the bylaw would force heavy trucks bypassing Thunder Bay to use Highway 11-17 and Highway 61 exclusively and would also designate routes within the city to include Hodder Avenue south to Main Street via Water Street, as well as heavy truck routes between the East End and Mission Island. This means that current heavy-truck routes like Dawson Road, Oliver Road and Arthur Street W. would be off-limits to most trucks engaged in Northern Ontario and Western Canadian trade.

“While OTA is aware of council’s historic concerns and rationale for introducing such measures, the association would once again like to remind council of the possible unintended safety consequences of such measures and reintroduce a proposed solution that includes community safety zone designations and the use of photo radar,” said OTA president Stephen Laskowski.

OTA also asked council to clarify whether the newly proposed truck routes are built to the safety standards required to handle the new volume of commercial traffic. OTA understands that some intersection improvements have been made along the expressway, but that several additional improvements may be required particularly from an advanced warning perspective for signal changes.

“As a road safety partner, we want to avoid at all costs the deterioration of existing safety conditions. The proposed bylaw should not create more safety problems for the public than it resolves,” said Laskowski.

OTA is also advising Council to perform an economic analysis of this bylaw. Carriers have expressed concerns about additional costs associated with this proposed truck route.

OTA has always understood the issues and safety concerns of Thunder Bay’s council as it pertains to trucks operating into and out of the city. In 2012 OTA recommended to Thunder Bay Council that instead of restricting traffic on key trade roadways, designate portions of these routes as community safety zones to ensure a higher level of speed compliance and safety in these areas of perceived need. In 2017, this policy approach of utilizing the community safety seems to make even more sense.

“The Ontario Government’s Bill 65, the Safer School Zones Act, will soon allow municipalities to introduce photo radar in community safety zones. Such a measure would not only allow the City of Thunder Bay to lower speeds in the appropriate areas, but enforce these speeds. This would seem to be a good compromise in ensuring that these historic trade routes remain open, while addressing the need of local constituents to slow traffic down in these areas,” said Laskowski.