Celadon is an OTA-member carrier and Russell was a former board member, who was a lively presence at OTA meetings whenever he attended. 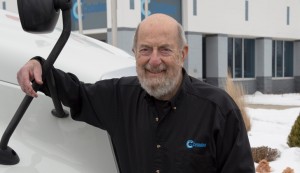 Russell, a New York native and son of a taxi driver, founded Celadon from a single truck in 1985. At the time he retired from its board in December, the Indianapolis, Indiana-based company had been built into a prominent North American trucking business generating more than $1 billion in revenue, operates a fleet consisting of more than 5,000 tractors, 12,000 trailers, and employs more than 4,000 associates across North America.

“It’s a very sad day,” Paul Will, CEO of Celadon, told Transport Topics. “He was an interesting, thoughtful and unique individual. He impressed on people to be open and say what you think. He was a friend to the employees, particularly the drivers. He always lived life to the fullest. Celadon so much a part of his life that it was like his fourth child.”

“We instituted a succession plan several years ago to begin to plan for this date,” commented Will.  “Over the past year, we have promoted Eric Meek to President and COO and made other changes to our executive team as Steve stepped away from the business.”

Russell was a member of the American Trucking Associations’ Executive Committee. He also served on the board of directors for the Cornell University Graduate School of Management, the Eiteljorg Museum, and the Indianapolis Museum of Art.