Transport Canada today announced forthcoming amendments to the Transportation of Dangerous Goods Regulations which include provisions to harmonize placarding requirements with the United States while at the same time providing more accurate information on the types of Dangerous Goods being transported, primarily for the purposes of first responders.

Federal Transport Minister Lisa Raitt made the announcement at a press conference held at the headquarters of the Canadian Trucking Alliance-Ontario Trucking Association in Toronto today.

After making her announcement, Minister Raitt placed one of the harmonized placards on a tractor trailer before going on a ride ‘n drive in a Kriska Transportation truck, where she saw first-hand some of the latest safety and environmental technologies on-board today’s modern tractor-trailers, including aerodynamic devices and electronic logs.

As for the TDG amendments, they were originally drafted and discussed with industry in the late 2000s, were supported by the Canadian Trucking Alliance (CTA) Board of Directors in 2009 and approved when the amendments were proposed in 2012 in Gazette I.

Although most of the amendments are minor in nature (designed to eliminate confusion with the interpretation of the regulations and those applicable to shippers), there are some key changes of interest for the trucking industry: 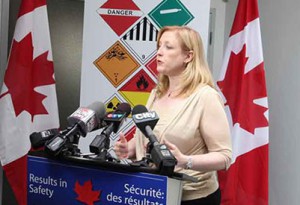 • Additional restrictions and quantities allowed for the display of a DANGER placard. The principal change is the use of the DANGER placards to loads (if eligible – meaning no superseding placarding requirements apply) only having a mass of less than 1000kg. This will align with US regulations, assist in cross-border compliance of shipments and provide more accurate information in the form of additional placards on the goods being transported. The DANGER placard up until these amendments,  was considered a coverall measure that can be misleading in terms of what type and quantity of goods are on board a vehicle and also relieved the responsibility of many shippers in terms of providing proper placarding for their shipments to carriers. From a transition standpoint, carriers moving multiple shipment loads from the US into Canada are already complying with restricted use of the DANGER placard;

•  Flexibility for drivers in leaving placards in place on large means of containment until all dangerous goods indicated by that placard are unloaded. Today, in many instances drivers must remove placards once the quantity of dangerous goods becomes less than 500 kgs or face non-compliance charges. This is a cumbersome requirement to comply with at times and misleading in the sense that there are still dangerous goods on the vehicle. This would significantly improve reciprocity with the regulations in the United States and make it easier for truck drivers with multiple deliveries to comply with the regulations and;

• Introduce new safety marks for dangerous goods included in Class 5.2, Organic Peroxides, for marine pollutants and for limited quantities of dangerous goods, to harmonize with the UN Recommendations for the Transport of Dangerous Goods.

It is expected Transport Canada will finalize these requirements in a Canada Gazette II publication in the near future. After that, there will be a six month transition period for drivers, carriers and shippers to come into compliance with the new requirements.

CTA will provide a full analysis of the changes once the regulations are introduced in Gazette II and will be introducing the new regulatory language in its 2015 edition of its Transporting Dangerous Goods by Truck publication.

In the meantime, complete details of the regulatory proposal (published in Gazette I, December 1, 2012) that will be incorporated into Gazette II, can be found here

CTA would like to express a special thanks to the fine folks at Kriska Transportation , Glasvan Great Dane, Tallman Truck Centre for preparing the equipment that was on display at the press conference and for helping to make the event so successful.