Momentum continues to build towards the implementation of a federal ELD mandate in Canada. Late yesterday, Transport Canada released its long-awaited Cost-Benefit Analysis (CBA) for a proposed mandate that would apply to all federally-regulated vehicles where the driver is currently required to complete a paper logbook.

The CBA looked at two scenarios: One included all federally-regulated commercial motor vehicles in Canada that would be covered by the mandate while the other excluded those vehicles which would be covered by the US mandate. In both cases the result was the same. Benefits are expected to exceed the costs associated with a Canadian ELD mandate by a 2:1 ratio. 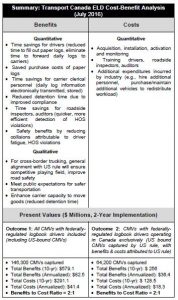 According to the CBA “ELDs are an effective compliance tool to reduce the potential for driver fatigue and the likelihood of a driver reporting incorrect data on a paper log book … (and) are expected to improve road safety by increasing the accuracy of tracking driving hours (to ensure that allowable driving hours are not exceeded) and reducing potentially high-risk situations whereby drivers may operate in a fatigued state.”

The sidebar table provides a summary of the Transport Canada findings and conclusions. A full copy of the CBA is available to CTA members by emailing [email protected] .

The net benefits will accrue to drivers, carriers and to government with the CBA suggesting that among the total benefits, savings to industry, including both drivers and motor carriers, account for 99% of the benefit.

“The CBA provides a sound analytical basis that confirms the significant net benefit from an ELD mandate and dispels some of the myths about ELDs that are out there,” says David Bradley, CEO of the Canadian Trucking Alliance, which has been championing such a requirement since 2005. “Now that the federal government has made its path clear, we call on all provinces to get onboard and extend the mandate to provincially-regulated vehicles as well.”

The compliance date for the United States’ ELD mandate is December 2017, with grandfathering provided for qualifying technology until December 2019. The exact phase-in period and dates for compliance with the Canadian federal ELD regulatory proposal has not been established. In the CBA, Transport Canada says that it wishes to align with the United States to the extent possible. However, it also says “regulatory amendment is expected to come into force in year three (2 years after publication of the final regulation)”.

During the course of the CBA, a one-year transition period was considered but showed a significant cost increase. CTA supports the two-year phase-in, plus an additional two-years grandfathering for qualifying equipment. It is expected Transport Canada will kick off the formal regulatory process with a Canada Gazette Pt. 1 notice as early as Spring 2017.

Some interesting facts and assumptions based on various sources and years contained in the CBA include:

Check out CTA’s ELD white board tutorial below: