These are undoubtedly volatile times for Ontario motor carriers, as perhaps the recent US election and uncertainly over the future of NAFTA could arguably be shaking truckers’ confidence in the North American freight market.

According to the Ontario Trucking Association’s fourth quarter 2016 business conditions survey for the bellwether sector, less than half (49%) of carriers feel good about their overall prospects over the next three months, down from 55% in the previous 2Q16 survey and radically lower than just a couple years back when 85% and 86% of carriers respectively conveyed overall optimism in the 4Q14 and 1Q15 surveys. A third said they were ‘unsure’ about their prospects, the highest level of uncertainty since the recession of 2009; while 20% expressed pessimism, more than double the rate of carriers who said the same just two years ago.

Near-sight: The 4Q16 survey indicates the ‘peak’ pre-holiday shipping season was subdued compared to previous years. While a majority (61%), of carriers suggest little to no fluctuation on intra-Ontario freight volumes compared to three months ago, only a quarter said volumes improved, down from 37% in the previous 2Q survey even though freight traditionally ramps up during the autumn months. The 15-percent who said volumes had dropped is still a small slice of respondents, but about double that of 2014 when negative sentiment was in the low single digits. Inter-provincially 19% said freight had improved, an 11-point drop from the previous survey this year and less than half of 4Q13. The previous three months show stability, at least for now, on southbound volumes as half of carriers report no freight volume change while 40% describe an improvement – both rates nearly mirroring previous the two surveys – but still about 20 points lower than in 2014.  Northbound, 43% suggest decreased volumes, the second highest after 4Q15 while 40% said freight levels remain unchanged. 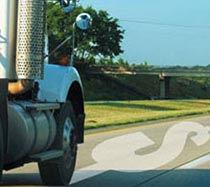 Longer View: As carriers look ahead, it appears the traditional post-holiday shipping doldrums of Jan-Feb might extend even farther out. Asked about their six-month outlook on intra-Ontario freight, an overwhelmingly majority (81%) predict no change, indicating a significant expectation of sustained stagnancy even into the spring ‘mini-peak’ season. That’s the highest level of nonalignment OTA has ever recorded. Meanwhile, only 19% forecast improved volumes, down from 26% last quarter and about half as many who expressed optimism this time last year. Similarly, 77% expect no freight changes inter-provincially, also an all-time high. For US-bound freight, which carriers generally view more favorably than domestic business, the outlook took a unusual twist in this survey: Again, a large majority (70%) predict a continued freeze, which is also an all-time high for this category; while the 27% who expressed optimism is the lowest since the Great Recession and a fraction of what it was in 2014. For northbound freight, the third of carriers who suggest more decreases are on the way is also the highest since 2009. But overall, the mood for this sector has been depressed for a while as that 33% rate is not dramatically different than the last two surveys (28% and 21%)

Carriers’ low expectations for the freight market may have been partially soured by a rate environment which continues to recede. Within Ontario, 67% indicated no movement on pricing in the last three months, while only a meager 6% conveyed pricing growth – a fraction of respondents who said the same thing last year. The 27% who report worsening rates matched the previous 2Q16 survey’s four-year high. Similarly, two-thirds of carriers saw no change in inter-provincial rates, while the 13% who said these rates rose was the lowest since 2013. On the flipside, there was a real plate shift in southbound pricing. Less than half feel rates are stuck in the mud (47%) compared to 67% last quarter. The bad news? Only 9% suggested rates were progressing upward – the lowest since 2013 – while 44% saw U.S. bound-freight rates deflate, double that of the previous survey. Northbound/backhaul rates continue their volatility. Only 28% said there was no change, an all-time low for this subset, while a third (33%) expect price drops – a seven-year high. Meanwhile, 39% report elevated pricing improvements – 10 to 15 points higher than the previous two surveys.

Not much has changed to tip the capacity scale. 53% of carriers report no shift in capacity in the previous quarter and 66% don’t foresee that changing in the next six months. Still, 36% experienced more capacity – down 10 points from 2Q16, and up 12 points from 4Q15.  Only 11% saw capacity shrink, the second lowest level in seven years.

Oddly, while there continues to be spots of slack capacity – and with it, soft pricing – carriers who say customers are extending contracts and locking in capacity at all-time high (46%), at least 30 points higher than any of the previous eight surveys. This is perhaps an early indication shippers feel the brink of a transportation cost surge on the horizon, likely in the form of fuel prices, new environmental equipment and salary raises in a market short of truck drivers. Only half said contact times not changing, a far cry from the 91% and 81% who said so in the first and second quarters of 2014.

Not surprisingly, then, rising costs continues to be an issue fleets are grappling with. There’s no relief in sight on the rising cost of equipment, specifically tractors and engines as 80% of carriers say prices have gone up by 10% or more. After a two-year lull in fuel costs, the price for diesel is undoubtedly on an upswing. Exactly a third of respondents say it’s more expensive, up from the 11-15 percent who indicated the same in the previous three surveys going back to 2014. Seventy-nine percent say they are paying more in maintenance costs, likely due to the highly technical nature of later model EPA-mandated engines, which also tend to be more volatile in reliability.

Carriers top three concerns unsurprisingly have not changed in several consecutive surveys. Once again, the driver shortage was selected as the top factor for anxiety among carriers (33%), followed by the economy and rates/capacity.