“With a new year comes new issues to deal with, but the old ones haven’t gone away. Or have they?” comments Jonathan Starks, FTR’s director of transportation analysis.

Diesel fuel prices have dropped nearly 20% over the last year, and nearly all of that drop has occurred over the last six months. After a year that started with severe weather, which kept truck capacity limited until summer, December brought welcome relief as the congressional budget bill removed one of the restrictions keeping driver productivity down.

Finally, an economic recovery that couldn’t seem to gain any traction rebou 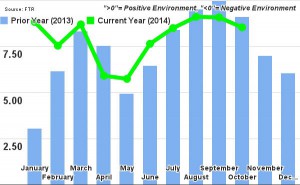 “The drop in diesel prices is a dramatic change in the operating environment for carriers after a four-year span in which fuel prices were nearly stagnant,” he says. “This drop is the single biggest contributor to November’s improvement in the TCI and is expected to continue to push the TCI higher when the December results are in. Conversely, carriers will take a hit to margins when fuel costs inevitably rise. It remains to be seen if the drop in fuel costs will benefit rate negotiations in early 2015.”

The TCI is included in FTR’s monthly Trucking Update, which reports data that directly impacts the activity and profitability of truck fleets.