More than half of truck operators in the U.S. are 45 or older, according to data presented last by the American Transportation Research Institute, placing even more stress on the systematic underpinnings of an already problematic driver recruiting and retention problem. 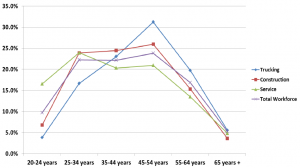 As reported by CCJ magazine, ATRI states the number of drivers in the 25-34 age group “have decreased significantly” while the industry’s current “greatest generation” of truck operators will be retiring within the next decade or so.

However, the industry’s shift to older employees is a more recent trend than previously thought, Brewster said.

“Post-2003, and it might be related to the Great Recession, when a lot of people left and simply didn’t return,” she said, saying former drivers sought employment in other industries.

Brewster reinforced ideas that have been discussed among carrier advocacy groups to tackle the issues, such as the “graduated CDL” idea to bridge the eligibility gap between high-school graduation and age 21, likewise a push for more vocational education in high school about careers in transportation, including truck operation.

But she also noted data sources that could help carrier operations teams better plan routes to help improve the driver’s experience on the road, avoiding the pitfalls on long-distance hauling. One such tool is ATRI’s report on the top freight bottlenecks in the nation. Dive into that study and you’ll find ideal times for traversing those bottlenecks, when the average speed has historically been highest.

The battle with the Federal Motor Carrier Safety Administration over the hours of service’s restart restrictions saw a certain amount of concurrence between drivers’ and carriers’ concerns, and illustrated how important hours flexibility had become for drivers navigating an increasingly congested highway system.

The situation is not dissimilar in Canada, where truck drivers represent the highest pool of workers aged 45 or older.

Although the entire Canadian workforce is aging, the Conference Board found in a landmark study that  the average truck driver (44.2 years-old, with 20% being over the age of 54) is older than the average Canadian worker (40.2) and the driver population is aging more rapidly than the rest of the labour force. As well, the for-hire trucking industry is faring worse than other sectors, including similar occupations, when it comes to attracting young workers as only 12-per cent of for-hire drivers are under the age of 30.

The Conference Board predicts Canada could experience a shortage of 25,000 to 33,000 for-hire truck drivers by 2020, disrupting not only the trucking industry, but the Canadian economy and ultimately affecting the well-being of consumers as well. 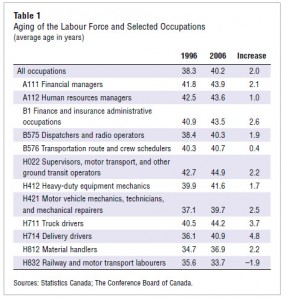